A Story that Needs Telling

Military historians have failed if their objective was to portray the reality of war.  Here’s General Satterfield‘s story, in his own words, of the Engineer Soldiers’ exploits on the battlefields of Iraq.  His story is told to understand war, appreciate the Soldier, and comprehend what happened and why. 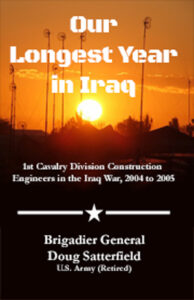 It is the American ideal that we go to war to liberate, to restore freedom, and to end tyranny.  Americans have the moral responsibility to be the world’s leading force for peace, and we can thank God that the love of freedom prompts individuals to act courageously at home and on the battlefield.

From the ancient city of Ur where Abraham lived, to the dangers of Sadr City, Baghdad, and Fallujah, Construction Engineers of the 1st Cavalry Division were there.

Army Engineers were among the first Soldiers on the Iraq battlefield; some of the last to leave. This book tells the story of those who stood alongside our warfighters in combat. For those who want a glimpse of modern warfare and read about Soldiers in combat, this book is written in an easy-to-read form for a general audience.

To truly appreciate courage and sacrifice, triumph and failure, honor and betrayal, then read this book.