[February 28, 2022]  From the fact it was made in 1930, you could class “All Quiet on the Western Front” as a war movie museum piece, but Lewis Milestone’s film is a seminal piece of anti-war propaganda, focusing on the Great War from the perspective of a group of German soldiers, in particular Paul Baumer (Lew Ayres). Ayres gives a sensitive and powerful performance: by the 2nd World War, the actor chose to serve as a medic, where he gained distinction.

Remembered for the sequence with the butterfly at the end, this early talkie manages to set its scene and transmit a powerful message. On its recent restoration and cinema re-release, an involving and clever film has taken on new significance in the 21st century.

Still one of the most worthwhile films about the complex realities of war, “All Quiet On The Western Front” has numerous memorable 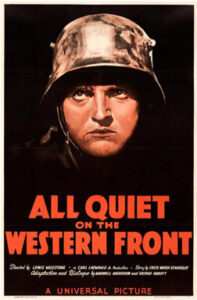 images and thoughtful moments. Too many war dramas, regardless of their perspective, resort to distortions of history and overblown characters that make them convincing only to those who watch uncritically. This one works nicely by keeping the characters low-key and, for the most part, allowing the events and situations to speak for themselves. It’s not perfect in this respect, and it is perhaps a movie more to be respected than enjoyed, but it has many notable strengths.

The true excellence of this movie is not only in the war scenes and the acting but in the characterization of the soldier’s nature and the nature of war. On top, you get a feel for the war of the trenches – without bombastic and shallow theatrical music. The only “sound effects” in All Quiet on the Western Front are those of war – the screams of the soldiers, the “singing” of flying shells and the many explosions and the sounds of guns.

I was in High School when I first saw this excellent war film, and I am now a senior citizen and have seen it a few more times. The film remains at the top of my list of outstanding war pictures. Highly recommended.

[January 14, 2022]  “The Bridge On the River Kwai” (1957) takes place in Japan-occupied Siam (later Thailand) in 1943 after the Imperial Japanese Empire has conquered vast territories of Asia. 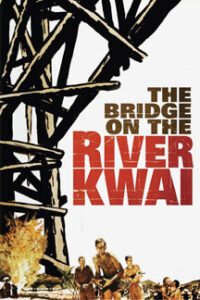 To Saito’s confusion, Nicholson upholds British military traditions with his men, not at all taking defeat as a humiliation. Nicholson refuses to bow to Saito and uses the bridge project to prove the superiority of the British and keep up the captives’ morale. Meanwhile, escaped American soldier Shears (William Holden) is forced back to the Kwai compound to help advise a commando team assigned to destroy the bridge.

Winner of seven Academy Awards, including Best Picture, this might be one of the finest war films of all time. Though based on a real-life WWII incident, the devastating story is really about what constitutes military duty and “honor” — and how they can be twisted into disloyalty and dastardly treachery. While not explicitly bloody, there’s a downbeat ending and a final one-word line of dialogue that sums up the whole thing: “Madness!”

There is an abundance of excitement in The Bridge on the River Kwai (the last 20 minutes are excruciatingly tense), but well-acted minefields of issues and thoughtfulness are what make this a formidable arsenal. This is a war movie about ideas, not just blowing things up — but in the end, both those attributes turn into the same thing, in an example of the usually noble concepts of battlefield chivalry and obedience taken to extremes.

[December 30, 2020] U.S. Marine Gunny Sergeant Thomas Highway is a highly decorated veteran of two wars; Korea and Vietnam. In Heartbreak Ridge (1986), Gunny Sergeant Highway, played by Clint Eastwood, is on his last assignment when he is given a group of undisciplined recruits to prepare them for a war they don’t believe will come their way; the invasion of Grenada which took place in 1983. 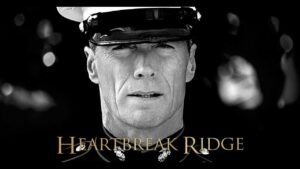 Ultimately, the film centers on Clint Eastwood as he makes this Marine Sergeant come to life. It’s the main reason to watch the movie as he whips these new Marines into shape. The movie has a familiar theme; boot camp to battlefield. This movie is classic Eastwood – gravel voiced, tough guy Marine, and with a bit of clashing of egos we expect to see.

Gunny Highway is surrounded by officers with no combat experience who view him as an oddity, even dangerous (which he is), and a Neanderthal knuckle dragger. Highway is thus saddled with military politics as the movie provides us with the struggle to re-establish American military superiority. Some critics claim Heartbreak Ridge is clichéd. And it is. But that doesn’t matter. This is an archetypal action-war movie with a subplot of the generation gap between Gunny Highway and his recruits.

Clint Eastwood plays the kick-ass, punch throwing, profane-laced language, stereotypical Marine Gunny that we all love. Heartbreak Ridge is my favorite Eastwood movie. It shows him at his best. The film’s technical points are correct; its pacing is excellent and doesn’t get bogged down in any aspect from training to war. In addition, it doesn’t gloss over any of the necessary steps.

This is another MUST WATCH film. You can see the official trailer here on this YouTube video clip (link here, 2:37 minutes).

[November 16, 2020] The Great Escape (1963) is one of the all-time best action movies. It tells the story of the biggest attempt by Allied POWs to escape from a German prison camp. The Allied prisoners are a prickly bunch, but they are forced to work together to escape their German captors. 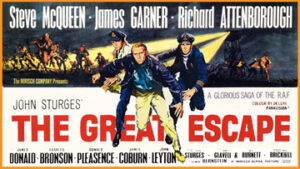 The Great Escape has a star-studded cast: Charles Bronson, David McCallum, James Coburn, James Garner, Richard Attenborough, and of course, Steve McQueen as the star of the film. Directed by John Sturges, the movie takes us through the planning stages of an audacious plan for several hundred prisoners to escape.

The movie plays like a classic heist sequence but in reverse; a breakout instead of a break-in. Based on Paul Brickhill’s memoir, it takes place in the meticulously re-created Stalag Luft III, a German maximum-security POW camp designed to house Allied officers with a reputation for escape artistry. The Germans feel confident they have all their rotten eggs in one basket. But in their hubris, they underestimate the collective cunning of this brain trust.

A crack specialist team joins an audacious effort to construct three tunnels (each one 30 feet deep and 300 feet long). In this mostly British effort, the wildcard is Steve McQueen, a rebellious American loner whose escape attempts repeatedly land him in the cooler.

It is a bit of film history now, but Steve McQueen accepted the role of “The Cooler King” on the condition that he could show off his motorcycle skills. McQueen speeding across the German countryside and leaping over the first of two barbed-wire fences leading into neutral Switzerland may be the film’s most iconic and enduring image.

This is another MUST WATCH film. You can see the iconic motorcycle chase in this YouTube video clip (link here, 6:43 minutes).

[October 11, 2020]  Sit back, buckle your seatbelt, get ready to ride along on a journey through the past, and visit an old war movie. My hobby, classic war films – you know the ones, before color cinematography and special effects. 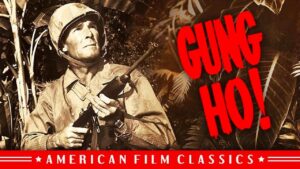 rote that “Gung Ho! Is for folks with strong stomachs and taste for the submachine gun.”

The film possesses all the elements of suspense, of sudden and concentrated action, and heroic accomplishment against all the odds. It tells the story of the 2nd Marine Raider Battalion that invades the island using rubber boats. 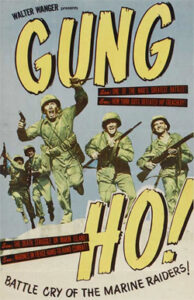 The landing is met by fire from Japanese snipers hiding in palm trees. The Marines dispose of them, attack the Japanese headquarters, wipe out the garrison, destroy installations with explosives, and then board submarines for their return home. This 1942 early-war raid on the Japanese-held island of Makin was a tactical failure and produced little intelligence but boosted spirits of our troops and the people back home got a temporary lift in morale.

I love this film. It has every cliché in the book. Brawling rivals, treacherous Japanese soldiers, Marines throwing knives with deadly accuracy, explosions galore filling the air with flying debris, bayonets, judo, and manically giggling Japanese pilots while they attack the Marines.

The film is a MUST WATCH. You can view the full-length movie, free of charge, on YouTube (at this link, 1 hr 26 min).