[April 13, 2016]  Military commanders are responsible for what happens within their commands; the good, the bad, and the ugly.  This is a steadfast rule that has long been accepted as a way of ensuring everything possible is done to ensure success on the battlefield.  Many lessons can be learned from examples where leaders are held to that principle.  The Bataan Death, April through May 1942, is one such example.

Simultaneous to the Japanese attack on the U.S. Naval base a Pearl Harbor, Hawaii on December 7, 1941, the Japanese Imperial military attacked the Philippines, bombing airfields and bases, harbors, and airfields.  They needed the islands as a near perfect resupply location for their planned conquest of the southern Pacific.  On April 9th, the American and Filipino troops on the Bataan Peninsula of West Luzon Island decided that could no longer resist the Japanese onslaught and surrendered. 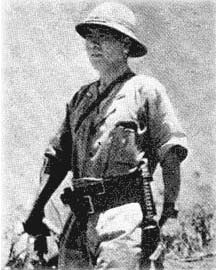 Lieutenant General Masaharu Homma (本間 雅晴) was commander of the 14th Imperial Japanese Army that invaded the Philippines and perpetrated the Bataan Death March.  He was under strict orders to quickly capture the islands but the surrender of 76,000 Filipino-American forces, many more than planned for, was to upset the timetable and he was later criticized by his commander as being too cautious in the campaign.1

While it is not clear that Homma ordered the atrocities to occur during the march, his lack of attention to the administrative efforts to oversee such a large movement and his failure to delegate authority and control his men helped enable the atrocities.  At his war crimes trial later in early 1946, he claimed that he was consumed with the plans for the Corregidor assault and that he’d forgotten about the prisoner’s treatment and that he trusted his officers to properly handle the matter.

Homma was convicted on all counts and sentenced to death and executed by firing squad.  It is interesting for those of us who study military leadership and history that there were various claims that the trail of Homma was unfair and biased.  The proceedings and conduct at the trial were reviewed by General Douglas MacArthur who stated:

“If this defendant does not deserve his judicial fate, none in jurisdictional history ever did. There can be no greater, more heinous or more dangerous crime than the mass destruction, under guise of military authority or military necessity, of helpless men incapable of further contribution to war effort. A failure of law process to punish such acts of criminal enormity would threaten the very fabric of world society.” – General Douglas MacArthur2

Commanders are responsible for what does or does not happen under their command.  General Homma’s failure was one of the most egregious in recorded history.  His failure is the reason that I’ve included his photograph here and used his name.  Leaders should hold Homma up as an example of failed senior leadership.