[July 26, 2014] The war on terror that the United States has fought since the shocking events of September 11, 2001 has been directed at al Qaeda and its many affiliates throughout the world. But, the war began before America even knew it was at war.

Today’s reading list choice is about one of those attacks pre-dating the beginning of what we know as the war on terror. Leaders learn quickly from history or they are “doomed to repeat it.” This book is about failure and triumph. A good read. 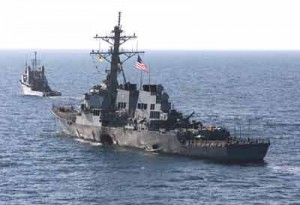 Kirk Lippold, the USS Cole’s captain, is a determined and focused man. He is the very type that should be in charge of a ship because he knows how team work and courage can make the difference in time of war. But when this ship was attacked we were not at war. The U.S. intelligence agencies knew about al Qaeda and terrorism in the Middle East but did not share much of that information with our military in the field or to those most in need of it. This failure is part of the reason that the attack on the USS Cole was successful. In his book, Lippold gives the personal story of the attack and the days that followed. It shows how he recognized the immediate importance of saving lives and fending off any other attacks. This book is an important part of military history. Young leaders would do well to study it and learn that the higher chain of command will not always be helpful and what they can do to improve their team’s capabilities.