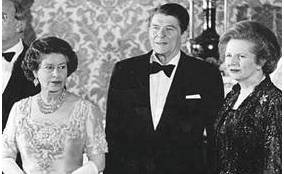 [September 22, 2013]  The Right Honorable Baroness Margaret Hilda Thatcher, a British politician who was the Prime Minister of the United Kingdom from 1979 to 1990.  A Soviet journalist once called her the “Iron Lady”, a nickname that became associated with her leadership style.

When she became leader of the Conservative Party in 1975, Britain was on the brink of financial disaster, threatened by total collapse.  When she was forced from power in 1990, she left a sound economy and a confident and well-ordered society.

The achievement was remarkable.  She enjoyed 11½ years in office, longer than any other 20th century politician.  The secret of her success lies in a combination of qualities, which both saw her into senior leadership and were the essence of her period in power:

She was a woman in a man’s world. Yet, she turned what could have been a disadvantage into a useful weapon, and she had luck.  Leaders like Margaret Thatcher leave sturdy paths built on the foundations of determination and hard-work.

Her leadership style was fundamentally different to the post WWII political leaders of Great Britain, in particular since Prime Minister Winston Churchill.  Perhaps this is why she was so well loved and hated.  But she was unarguably the most productive and successful PM since the mid 1950s.