[August 11, 2014] There are many who believe that Pope John Paul II will be remembered as one of the most effective Popes and most understanding of people in the last century.  Known as Saint John Paul the Great, he was Pope of the Catholic Church from 1978 until his death in 2005. 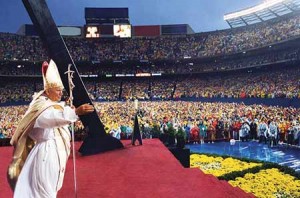 One of the most famous comments from World War II came from the brutal dictator Joseph Stalin. British Prime Minister Churchill had cautioned Stalin to consider the views of the Vatican in the post war years. Stalin responded, “How many divisions does the Pope of Rome have?” Soviet Communism and its sister socialism have little respect for religion and views religion as useless and irrelevant. It is interesting to note that Pope John Paul II said in almost as many words that socialism was a historical failure.1

Selecting Pope John Paul II was an easy one. Anyone familiar with the history of the fall of the Soviet Union in December 1991 will know that this Pope was a significant force in that effort. By 1990 over 40 percent of the Soviet Union’s citizens believed in God. This was a radical reversal from the times of Stalin and WWII.

There are some consistent qualities about this Pope. What were the key attributes that Pope John Paul II possessed that are most often cited as the reason for his success as a senior leader?

Unquestionably, Pope John Paul II was no Douglas MacArthur or Winston Churchill. He was no leader of a country and was certainly underestimated by many. But he was the spiritual leader of people around the world and despite having “no [military] divisions,” he was able to influence everyone for the good of humankind.