[June 10, 2014] A pattern emerges from the study of great leaders demonstrating that many of those who are the greatest of leaders were successful at both governance and military leadership. This pattern holds for Ramesses II (1303 BC – 1213 BC), also known as Ramesses the Great – the third Egyptian pharaoh of the 19th dynasty. He is considered the greatest and most powerful pharaoh of the Egyptian Empire. 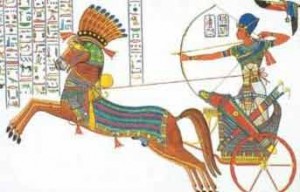 The distance of his reign in time and the lack of good records make the profiling of his leadership difficult. Indicators of his great leadership come into view when we look at how the empire changed during his long rule of 66 years. Leadership style cannot be inferred but we can get some ideas from the inscriptions on tombs.

The following is from an inscription on the base of a Ramesses II’s statues. It says:

“I am Osymandias, King of Kings. If anyone would know how great I am, … let him surpass one of my works.” – Ramesses II (Note that Osymandias is another name for Ramesses II)

Some of his leadership characteristics (sort of a philosophy) from indirect evidence were:

Ramesses II was legendary as a fabled king. Due to his actions, Ramesses II is known as one of the greatest leaders of all time.

[Note] A few good websites that give some history of Ramesses II: