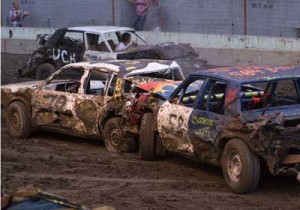 [December 10, 2014] Jacob Comstock is an unassuming kind of guy; the type you would find at the local bar having a beer with friends. Yet, he is a champion of the manly sport known as “demolition derby.” Participants in the sport have to have a bit of courage mixed with a lot of aggressive driving skills and the desire to smash things.

As kids, who did not have the desire to smash things? There are very few rules in demolition derbies besides having “the last car” to survive. Drivers compete by ramming their vehicles into one another and the last driver whose vehicle is still operating is awarded the victory.

The center of the Demolition Derby appears to be in Michigan. The original derbies in the United States were held at fairs, race tracks, and speedways back in the 1950s. There is some controversy over who started it and where but many credit stock car racer Larry Mendelsohn who ran them at the New York State’s Islip Speedway after realizing people favored wrecks to racing. The country of Australia was quick to pick up the manly sport – and we know the Aussies have real men living there.

My personal favorite is watching the competition on a dirt track that’s been watered so there is plenty of mud for the cars to slip and slide on. It makes quick maneuvers difficult and simply adds to the fun. Ever watch a demolition derby? If not, you sure have missed a fun part of life. They also have special vehicle events like the school bus competition, as well as the police car event. Take a stroll through the Smash’em and Crash’em video found here on YouTube (link).

Demolition derbies for the professional are a ferocious, tough, and grueling competition that fits well into the American culture. I’ve always been fascinated by watching it, as have millions in over the past decades.1,2 Car racing doesn’t seem the same after a real good demolition derby contest. I can hardly wait for the 2014 Munger Potato Festival demolition derby.