[August 22, 2014] “Yuh gotta hand it to baseball and schmucks,” so says my good friend Vinny. I like to say that you simply cannot make this stuff up. While we watched the Chicago Cubs – San Francisco Giants game earlier this week, the umpires called the game for rain and declared the Cubs the winner at 2-0. Not to be easily swayed, the SF Giants protested the call because the Cubs’ field workers did a poor job of maintaining the playing field. What? A rain delay, no way. 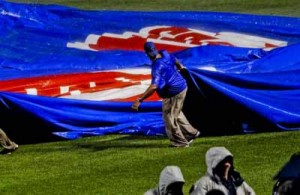 Turns out this is the first time in at least 28 years that such a protest has been upheld. Now it was officially a rain delay.1 But wait, the game resumed 48 hours later … and this time there were extra Cubs’ field workers standing by to manhandle the big tarps protecting the field. Alas, the SF Giants fans were disappointed. The final score? 2-1 Cubs!

I love baseball. It’s the heart of the game that makes it so great. What’s the sport’s lesson? It’s not over until it’s over.