[August 22, 2014] Leaders who find themselves being emotionally drawn into certain situations risk being seen as biased, untrustworthy, fixated, and partisan. The best leaders treat their job as a professional. Senior leaders should be careful about taking things personal in their work. The message sent is that they can be swayed or manipulated by certain issues. Therefore, if a leader does take things personal, it should be done carefully and with the knowledge of how they will be perceived. Typically, senior leaders should take on the philosophy that “it’s not personal.” 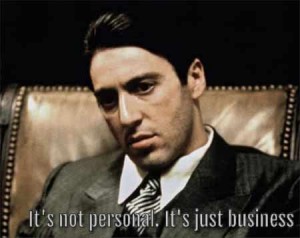 The loss of trust is one important aspect a leader will likely lose when they treat situations where they have emotional attachments to the outcome. There certainly is a place for it. For example, when New York City mayor Rudy Giuliani gave a rousing speech to workers at the collapsed World Trade Center the day after 9/11, the emotion was well received by all. The message was that he would work tirelessly to repair the destruction. But more importantly, he communicated that he stood with them, shoulder-to-shoulder. All New Yorkers were together on this. In a rare case like this, trust is not lost but gained.

Contrast this, for example, when an attorney is involved in a court case and claims that the case is personal for him. Those on the other side of the case and spectators will see the attorney in a much less favorable light. It would not be unusual for the side opposing that attorney to go out of their way and spend more time and money to fight him. Much of this is simply human nature and that is why leaders must understand human psychology.