[August 21, 2014] Here at theLeaderMaker.com, we are commemorating World War I with the hope of never repeating the same political and military mistakes. Students of history know WWI was a nasty affair that resulted in the deaths of millions. It wrought havoc everywhere and instead of solving any problem, it actually put into motion events that would result in World War Two and the deaths of many more millions. Students of history also know about Germany’s Schlieffen Plan; designed to stop France in an attack on Germany. Plan XVII was France’s strategic plan for the invasion of Germany by advancing through Lorraine and Ardennes. 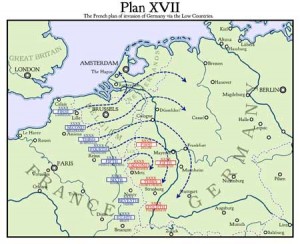 At the beginning of WWI, France actually carried out Plan XVII. After initial success through the Alsace-Lorraine region, strong Germany resistance and success of the Schlieffen Plan resulted in the French armies being halted. In the early 20th Century, wars could be won with whatever nation or group of allies could get to the “enemy” country the fastest with the most troops. Plan XVII was a mobilization and concentration plan developed in 1913 by the French General Staff to do just that.

After Germany declared war on France in 1914, France executed Plan XVII. The French attacks went in as planned but resulted in worse losses than predicted. The French army doctrine did not anticipate that the plan required a much closer cooperation between artillery support and infantry. Additionally, the doctrine did not predict the full value of reconnaissance on the battlefield.

From a military perspective, the failure of Plan XVII can be directly linked to an outdated military doctrine, rigidity in command, and a good defense by the Germany military. After this failure and France’s retreat back to their original positions, Germany attacked using their Schlieffen Plan. Once the German armies outran their supply lines, the two sides quickly dug in and trench warfare became the deadly result.