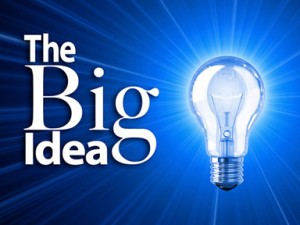 Big ideas are a framework, a way of making sense of something about the world we live in that solves a problem or makes something better.  They help us “see,” to organize desperate facts and details into a picture that gives us insight.

Charles Darwin wrote that his theory of evolution came to him suddenly.  Yet, a reading of his notes years before shows that he was unconsciously developing the idea for a long time … it had not yet crystallized in his mind.

“Nothing before had ever made me thoroughly realise, though I had read various scientific books, that science consists in grouping facts so that general laws or conclusions may be drawn from them.”  – Charles Darwin

There are two major points to be made about big ideas.  Charles Darwin’s theory of evolution is a case in point.

First, big ideas usually develop over time from close study and thought, discussion, and analysis.  Typically, big ideas don’t originate as a flash of the obvious but are something that slowly develops.

Second, once people are educated about the big idea, they should be able to apply the idea to a variety of events, beyond the original big idea itself.  The big idea should generate debate and analysis that can later be used to revise and improve upon it.

So, having big ideas means much more than simply coming up with some network of thoughts that explain reality.  It also means:

Big ideas take time to develop and take hold.  It is common for them to have little immediate impact.  For example, it took the television and the internet about 20 years each in development before they became accepted and viable economically.

Big ideas are important for organizational success in the long term but they are also something that takes time and resources to put into place.

Big ideas alone do not make a senior leader – but the ability of the leader to focus the attention of others will determine their true potential.  Their focus and discipline to keep the big goals in sight matters.