[December 20, 2020]  World War II was the largest and most destructive war ever.  It was a time of great upheaval, chaos, and death.  However, the war was also a time that saw America’s traditions carried forward onto the battlefields, the hospitals, and homes.  Christmas in WWII was given special attention.

Our troops did their best to celebrate Christmas.  Wartime separations and deprivations made festivities emotional and nostalgic.  The war found Americans on many wartime fronts in combat.  In 1941, for example, American soldiers were putting up a fighting retreat in the Philippines.1

In 1942, our troops fought on Guadalcanal, New Guinea, and Tunisia.  By 1943 they fought in the Southwest Pacific and Italy.  Christmas 1944 found the Allies reeling from the Battle of the Bulge in Europe and also engaged in northern Italy and back in the Philippines.

“The guys who won World War II and that whole generation have disappeared, and now we have a bunch of teenage twits.” – Clint Eastwood

Our military forces went out of their way to provide a holiday meal whenever possible.  Whether onboard ships or fix bases, meals of turkey and ham, were available.  In front-line combat units, field kitchens tried to provide turkey dinners. However, troops were happy to be alive and get a warm meal.

Army and Fleet Post Offices did an excellent job of providing presents from the home front.  Families were advised to mail Christmas packages by October 15, and there were weight and size restrictions.  Many of these gifts have been portrayed in war movies.  Cherished items such as candy, cookies, warm socks, and maybe a recording of one’s loved ones were sometimes received late. 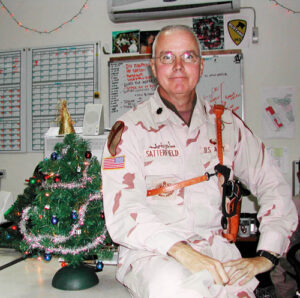 The troops decorated where they could but improvisation and creativity were the norm.  Ration tins and foil wrappings were used for makeshift decorations.  Paper was rare and was often an intentional part of the gifts mailed to the troops and used to decorate where possible.  In combat areas, troops would use such small items to pin to a nearby bush or place on their field jackets.  There was no shortage of making do.

Being separated from friends and family did not mean leaving traditions behind.  Keeping traditions alive was a way to maintain one’s sanity and help those struggling to deal with the horror of the war.  Many military bases arranged for Santa visits, concerts, and parties.  Additionally, many of the troops put together parties for local children.

These wartime struggles reminded the troops of the reason for Christmas, the birth of Jesus Christ.  But it was the creativity and generosity that made Christmas in WWII meaningful and memorable.

25 thoughts on “Christmas in World War II (the Battlefields)”