[June 06, 2014] Operation Overlord was the codename used for the invasion1 of German-occupied France. Today’s anniversary of those landings allows us to look back at a time that was very different when compared to our world today. However, we can see similarities across history that evil is not always recognized early for what it will do if not stopped soon enough. 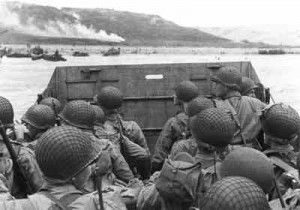 As part of the overall invasion plan, the Normandy landings themselves (codenamed Operation Neptune) led to the restoration of the French Republic and were a major contributor to Allied victory in the war.

Prior to the Normandy landings, several things occurred months in advance of D-Day:

Immediately preceding the assault, a massive naval and aerial bombardment and an airborne assault inland were conducted. These were designed to destroy German fortifications, hold key transportation nodes (e.g., bridges), and slow down German reinforcements.

The biggest problem however, after everything was ready, was the weather. Here is where guts, luck, and fortitude came into play when General Eisenhower made the decision to postpone the operation from June 5 to the next day, June 6. Later today, I will post the leadership lessons from the D-Day operation.

The landings were split into zones of responsibility designed of course to reduce confusion. There were five beaches: Utah and Omaha (American zone) as well as Gold, Juno, and Sword (British and Canadian zones). While D-Day, the first day of the landing did not accomplish all its objectives, the overall operation was a success and casualties, while high, were not as bad as it could have been.

The world is fortunate that the leadership needed at a time of global crisis was able to step forward and make the decisions necessary to win the war against evil. For the soldiers, sailors, Marines, airmen, and civilians of the U.S. military, we owe those heroes a debt of gratitude that can never be repaid. For our allies in the fight against evil, we owe them more than history has ordained.

[1] The invasion was designed to open a third front in the war in the European Theater; splitting the Axis enemy forces by making them fight in different directions. The other two were the Eastern Front (Russia) and the North African Campaign. Throughout most of the war, there had been a continuous and often acrimonious debate among the Allies as to how best to apply the limited friendly combat forces available. The war in the Pacific was also underway against Japan.

Thus, the landings in France came with not just a risk of failure of the war effort against German and Italy but was conducted at a time where there was no complete agreement among the Allies. Failure with the landings could have meant a break-up of the alliance and less cooperation and synchronization of the total war effort against the Axis Powers.