[April 09, 2014]  The federal government’s new public school lunch program announced in 2012 and quickly implemented in the past school year has developed a number of problems.  This happens when large bureaucratic programs are enacted without the groundwork and right leadership in place to ensure success. 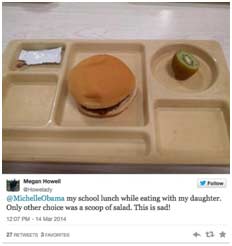 A tweet from a mother who ate lunch with her daughter.

Some of the “healthier” foods, the students would not eat.  Many of them have taken to social media to show their displeasure.1

This is unfortunate because we know that many school kids are not regularly getting healthy, nutritious lunches and obesity rates in young people are increasing.  The program was ambitious, providing new improved nutrition standards2 and aimed at all students regardless of financial status.

Poor execution by school districts trying to comply with the rules that are expensive or unpalatable is part of the problem.  Schools are seeing a decline in student participation rates3 and schools are also dropping out4.

More importantly, the problem is that the federal government has tried to implement a program quickly, with little or no input from schools, and on the cheap with no leadership to oversee the program.  It appears to be hastily constructed without a lot of thought of second or third order effects.  The most important effect is that students are simply opting out and bringing their own lunches or eating off campus.

There are some leadership lessons here.  The first lesson is that such a massive program should be carefully studied and a good evaluation made before implementation.  The second is to ensure there is proper leadership is in place with relevant experience.  Third, implementation should begin slowly to “test the waters” for second order effects.  None of this appears to have happened.

Now we see a tremendous waste of money and resources.  The federal government gets another “black eye” in its poorly conceived programs.  With a much-needed improvement in school nutrition, there was simply the shortsighted thinking that the program would succeed on its own merits.

Here is a another case of government failure to plan, failure to lead, and failure to use resources wisely.  Sadly, it all could have been avoided with better preparation and execution.  The program may very well succeed, and lets all hope it does, but for now, it’s a showcase for leadership failure.