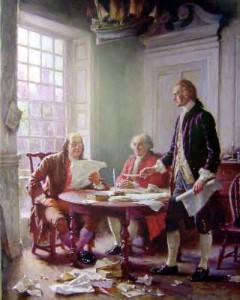 [July 04, 2014] “Freedom is not free.” And it is not easy to protect and defend. Our armed forces have done this admirably since the beginning of the United States’ founding. Seeing other nations today in their struggles for independence, helps us appreciate how precious freedom is and how our nation earned, defended, and preserved it.

The 13 colonies rejected the British Parliament’s “taxation without representation” in 1765. The Boston Tea Party was staged in 1773 in defiance of its unfair treatment of the people and property. When the British retaliated by removing the right to self-government, patriots had had enough and war was waged from 1775-1783.

Today, we rightly celebrate the strength of our Nation, its armed forces, and its citizens for their historical dedication to freedom.

Below are a few good websites dedicated to Independence Day. They are worth a stroll.