[June 29, 2018]  Pictured here is a U.S. Army Sergeant First Class with what we call a Green Tab on the epaulets of his uniform.1  The Green Tab signifies that the soldier is in a leadership position and, as such, commands a sizable amount of respect for the responsibilities he currently holds. 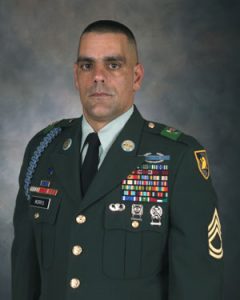 In the U.S. Army, there are many soldiers of high rank and yet who are – technically speaking – not leaders.  At one time, those leaders were authorized to wear a Green Tab under army regulations.2  The tab signified the wearer had responsibilities that significantly exceeded others of the same rank.

The Green Tab is no longer worn.  I’m not sure why the army leadership decided to remove it and did so about the time they also instructed us to no longer wear our branch insignia.  These insignias were to the casual observer, nothing more than a piece of cloth but to those who lived and breathed army, it was a big deal.

I first wore my Green Tab upon promotion to the rank of Infantry Sergeant.  I was a Team Leader in charge of a Forward Observer section.  Besides being happy that I’d achieved my childhood dream of being a “buck sergeant” I also wore the green felt tab on my epaulets.  It meant more responsibility (I now was in charge of 8 men) and signed for about $100,000 in equipment (I would pay out of pocket if my men or I lost any of it).

Leaders are given greater responsibilities than others and they relish the challenges involved.  No one in their right mind would take on such responsibilities, at no difference in pay or rank, unless there was something to be gained.  That gained is greater respect, credibility, and prestige.

Ultimately, however, leaders are not here for those things as much as it is because they know they can make a positive difference in the lives who those who follow.  Selfless service is what the U.S. military teaches its leaders and that is the epitome of the concept of good leadership.

27 thoughts on “Leaders, the Green Tab, and Responsibility”