[May 01 2014] My son is one of the “millennials,” despite that he and his young wife bristle at the label – somehow confusing a millennial man with a metro-sexual man. They work hard and are dedicated to their jobs, don’t trust politicians or the media to tell the truth, and just want to be left alone; they quickly identify a serious lack of leadership in Washington DC as our country’s main problem. 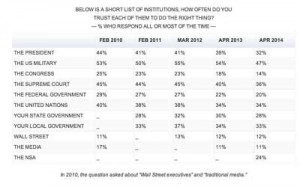 A new poll1 by Harvard University’s Institute of Politics this week found that millennials2 have even less trust in government institutions than in the past. This loss of trust and confidence is just one sign of a decline of effectiveness and vindictiveness of those they distrust the most; the media, 11%; Wall Street, 12%, and Congress, 14%.

Millennials see the impact of their government in those things that most directly affect them as young workers; higher taxes, poor government services, increased gasoline and grocery prices, etc. They also hear the nasty rhetoric so common these days and the “lies” coming from our elected officials; they remember those empty promises made!

Millennial perceptions on the failure of government leadership are a reflection of our society in all age groups, but points to where the country is headed. Now that they know what leader failure looks like, will they learn from it and grown their own leaders? I think, yes.