[April 28, 2014] World War II veterans have been called the Greatest Generation; and they rightly deserve our admiration. Yet prior to the attack on Pearl Harbor, this might not have been the case. Sadly, these veterans are passing away and few will survive the next decade – shutting the door on what we can learn directly from them. Next year we celebrate the 70th Anniversary of the victories in WWII. 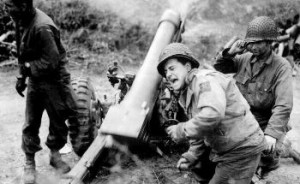 A Gallup poll in October 1940 found American youth as “a flabby, pacifistic, yellow, cynical, discouraged, and leftist lot.” A social scientist at the time, said that “to make a soldier out of the average free American citizen is not unlike domesticating a very wild species of animal.”

Before the December 7, 1941 attack by the Japanese and the great leadership of many WWII leaders emerged (like Marshall, Patton, Eisenhower, Roosevelt), young Americans were a “disappointing group, hardly capable of waging war effectively with a battle-hardened enemy.”

There was no passion for war to drive them like we would see after 1941 and the realities of combat in North Africa sank into their psych. Many were to receive difficult and harsh lessons of battle at places like the Kasserine Pass2 where U.S. units were badly mauled.

Physical and mental standards in 1940 were not strict by today’s standards; and they could not be so. America was still recovering from the Great Depression. A recruit, for example in the U.S. Army, had to be 5 feet tall and 105 pounds; have at least 12 (of 32) natural teeth; no flat feet; and free of venereal disease and hernias. Psychological screening often was no more than asking “Do you like girls?” Yet nearly 1 in 8 was rejected psychologically. Later, even these standards would fall away.

Over 16 million Americans served in WWII, incurring 291,557 casualties. We often overlook the leadership, the bravery, hardship, and great accomplishment of these Americans despite their discouraging start.

[1] Army at Dawn: The War in North Africa by Rick Atkinson