[February 10, 2014]  Winston Churchill was clearly one of the greatest leaders of the 20th century.

The best biography on Churchill is by William Manchester in his 3-part series The Last Lion: Winston Spenser Churchill1.  In the many readingson Churchill, we see talents early on in his life.  Our interest here is his most outstanding traits that set him apart from other leaders.

What were the defining senior leader characteristics of Winston Churchill? 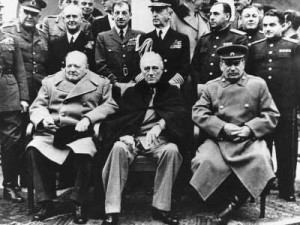 While it is difficult for a leader to possess all these characteristics, we know that Churchill managed it and will explain why he is considered one of the world’s greatest leaders.   We can also see Churchill’s development as a leader, starting with his early years as a young army officer, where he saw action in British India, The Sudan, and the Second Boer War.  Here he gained fame also as a war correspondent and wrote books about these campaigns.

Later in life, he became most famous for his courageous acts when he lead England during World War II.  Many of these attributes are very similar to other senior leaders profiled here on TheLeaderMaker.com.

He was required to inspire people and this he did.  Churchill was a man of his people; his inspiring speeches encouraged the British people to be courageous and hopeful in a time of despair.  One of his famous quotes was “Never, never, never give up.”  Churchill was a visionary who brought about major change.

One of his most famous quotes during WWII was:

During WWII, Churchill’s vision was of self-preservation and the preservation of free governments and Western civilizations against ever advancing sources of authority and dictatorship.

We honor his legacy as a truly great leader who was able to help western civilization overcome the 20th century’s destructive socialist and dictatorial trends.