[August 08, 2014] A few years ago I lived in a town that took advantage of the law. The law allowed city governments to charge cable companies for operating in their jurisdiction. Most communities do this today. It’s a subtle way of obtaining additional revenue without directly taxing citizens. Unexpectedly, the cable companies put a line-item on their monthly cable bill that said “city surcharge”. The reaction from city governments was as expected and they didn’t like the finger pointed at them. In short, the city leadership did not follow a simple rule of leadership: take credit for your decisions, especially when they do not reflect well upon you.

Being a leader, even in government, means making decisions that are not always popular. Often, people will be unhappy and upset with the leader who is involved in the decision making. As they say, “own up to it”. Admit the decision was made and why. Take credit for your decisions. It is easy to take credit for the good things that are done. But, it takes moral courage to stand up for unpopular decisions. 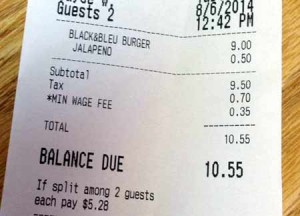 A small café owner recently tacked on a “minimum wage” fee to their customer dinner bills.1  A Midwest state’s legislature passed a minimum wage of $8 an hour, up 75 cents over the federal minimum. The impact is not clear although some claim it has increased prices. Apparently that is so for some restaurants because at least one is passing along the costs to customers. A union leader was quoted as stating that “Putting [the minimum wage] fees on tickets and passing the cost on to consumers directly is strange at best…”1 Hummm, curious. I guess they didn’t get the memo.