[July 21, 2014] It seems that humankind is at war with itself somewhere in the world every day. In the Clash of Civilizations, Samuel P. Huntington put forth the idea that cultural and religious identifies will be the main source of conflict. Today’s conflict in the Middle East between Israel and Hamas is just one example to support Huntington’s theory. The concept of a conflict in cultures is at the root of war has it merits. 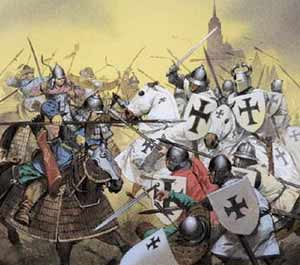 There are two major conflicts on-going in the world for at least the past century. Both involve the Islamic religion. The more historical and bloodiest conflict is Islam’s war with itself: Shia versus Sunni. I wrote about it earlier (link here) and pointed out that the conflict has recently devastated the country of Iraq. The other conflict is Islam’s war against the West. While many will disagree with that comment, there is ample evidence to support it. The internal strife in France is another current example of the Islam-West conflict.

The Islam-West cultural differences are significant. For example, when the terrorists attacks in the United States occurred on September 11, 2001, the Islamic world cheered. There were celebrations in the streets and, although subdued, celebrations also in America. Most recently when three Israeli teens were kidnapped and killed, there were more celebrations in the Islamic world. That is a fact that cannot be ignored and is an indication of the conflict in cultures.

Recognizing the seriousness of these conflicts and preparing democratic societies for the clash is the job of senior leaders. Of course, in democratic societies, this responsibility falls upon our political leaders. Leadership at the most senior levels within those governments ought to be studying the issues and preparing their populations for the violence that will follow. So far, Western democracies have remained largely unprepared and many of their citizens will pay a heavy price.