[April 22, 2016]  Yes, war settles disputes and I won’t qualify the statement because it’s true.  Human history has been burdened (and enthralled) with war from its beginnings and it will continue to be so; at least into the near future.  But, are the results of war predictable and desirable?  That is my subject today.

To take a cue from Thomas Hobbes, war is nasty, brutish, but rarely short.  War is the most destructive force a society can adopt and the unspeakable horror it delivers is beyond words.  It is therefore, no surprise that all societies have adopted it at one time or another.  It is meant to deliver a message to those it is perpetrated upon.  Yet history of warfare tells us that a predictable outcome is rare and therein lays the problem.

A few days ago, the American History Channel showed a short series on the American Revolution and they attempted to take the viewer from through the major events leading up to the actual fighting to the conclusion.  As we all know from hindsight, the British Empire and the most powerful nation on earth did not make a wise decision to send its army and navy to halt the rebellion in the colonial states.  The result was predictable and logical – stamping out of the American Rebellion – but the outcome was not to be. 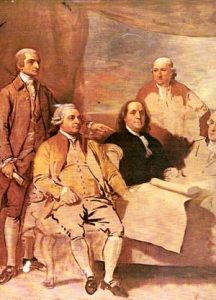 An unfinished, painting by artist Benjamin West shows the treaty between America and Great Britain being signed at the conclusion of the war.  What is of interest is that the British participants would not sit for the painting.  They refused.  In all likelihood they were commanded by their superiors not to pose, as the loss to the American Colonies shamed Britain and no artistic reminders were needed.

Although the outcome of any war is unpredictable in its entirety, it has rarely stopped nations from going to war with each other or from internal civil wars from occurring.  The claim that wars never accomplish anything is pathetic intellectual drivel.  Wars accomplish many things, despite the horror and cost in lives and treasure.  For example, it can stop an aggressive and combative nation (or alliance of nations) from enslaving other societies as the case of World War II.

Modern rules of warfare have come to replace much of the barbarity of war but it is still a brutish and horrid affair.  Ethical treatment of prisoners and civilians, the used of weapons of mass destruction, and such is covered by a number of United Nations agreements.  Circumventing the rules does occur although uncommon; it’s more likely the result of a rogue military unit or terrorist organization.

The world is a dangerous place … of course we know that.  Any nation that does not prepare for war is sure to have one and thus it is prudent to take reasonable actions that can deter it.