[July 14, 2014] One of the most profound and tragic lessons learned from World War I was that senior leaders being there in person, at the point of action, was critical for success of the operation. Whether the situation involves a large military action, a major business transition, or a national disaster, the senior leader must be physically present. Otherwise, opportunities are lost that cannot never be regained. 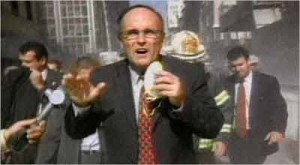 Mayor Rudolph W. Giuliani at the scene of the World Trade Center collapse on Sept. 11, 2001, from a Home Box Office documentary.

Leaders are always busy people. Yet when the need arises, a leader that takes time to go to where the action is happening will help bring success. Whether planned or not, leaders must be there especially bring people together that would not normally occur and to create the dynamics of a holistic team effort. In the U.S. Army, we call this “one team, one fight.”

Two examples to illustrate the point. First, an example of success occurred in New York City September 11, 2001 when Major Rudy Giuliani was “front and center” for all important events as the city recovered from the terrorist attacks. Second, an example of failure occurred in New Orleans after Hurricane Katrina hit on August 29, 2005; President Bush did not show up to tour the city for newly two weeks. When the senior leader is not physically present at critical times, there is the perception that the leadership is detached, disconnected, and disengaged.

There are other factors that play into the perception that leaders are detached but physical presence is the key to preventing misconceptions about engaged leadership. Senior leaders must take the time, change their schedules, and do those things that must be done in order to be there and to let people see and talk to them.

[See previous blog posting on “being there”: https://www.theleadermaker.com/topic-being-there/