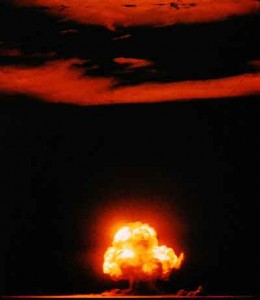 [July 16, 2014] If you were standing in the New Mexico desert, just south of Santa Fe on this date in 1945, you would have seen the first nuclear explosion and the beginning of a new age in warfare. Sixty-nine years ago today the Manhattan Project, also called Project Y, came to a successful end with the explosion of a plutonium bomb. The leadership required to conduct such a massive and complex project in total secrecy required the best skills of a military leader. Brigadier General Leslie R. Groves was in control of the entire project to assemble the team of scientists in order to bring World War II to an end.

The original target of the atomic bomb was Germany but they had already surrendered by this date. This was because of the “Germany first” policy of the allies; destroying the Nazi Regime was the highest priority. Japan was then selected as the target.

Leadership comes in many forms. Yet it will always require enormous character to succeed at the highest levels. The Manhattan Project is an example of how a critical, yet seemingly impossible task can be accomplished. There were many obstacles to Brig Gen Groves leadership; strong-minded scientists and political policy makers were often at loggerheads. Great leadership does not always mean physical courage. In this case it meant being able to assemble a team and keep it together for a period of years and accomplishing one of the most important missions of the war.