[June 21, 2014] The story of building initiative is an old one. I frequently tell an account of a conversation I had in mid-2007 Fallujah, Iraq. A U.S. Marine and I were talking about what Army engineers would do to assist them in defense of the city. The Marine told me he didn’t mind combat but never wanted to be an engineer because “you guys have to do stuff without being told.” He was talking about taking the initiative.

“Never interrupt someone doing something you said couldn’t be done.” – Amelia Earhart 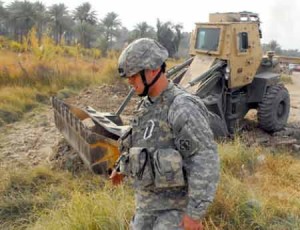 A U.S. Army engineer in Iraq

Yet, building initiative is something we rarely talk about with one another. There are things we do to motivate people but I have never seen a course or program on training how to build initiative. Perhaps it is assumed that people will take the initiative when necessary. I think this is a false assumption that can have unfortunate consequences.

“When linked with courage, initiative can get anything done.” – Unknown

Tomorrow, I will discuss the best settings and conditions that initiative can be built. [Don’t forget to “Like” the Leader Maker at our Facebook Page.]

[Note on Fallujah] What we did not know was that Fallujah would become known for the hard-fought battles in the Fall of 2007; also known as the “Second Battle of Fallujah”. The U.S. Marines are to be commended for their success in this battle which was due to the bravery of the individual Marine, their leadership, and the initiative that each one displayed.