[September 13, 2014] Every lieutenant in the Army remembers his first company commander. In these pages I occasionally refer to my experience with this first-rate nincompoop I had as a commander. Part of learning to be a good leader sometimes means getting a bad example – an example that tells us what not to do. That was my case in the early 1980s peacetime Army. My commander demanded that we salute him crisply … that was already a requirement. But he also demanded that everyone respect him for his position; to hear him talk, his job was the most important in the unit. 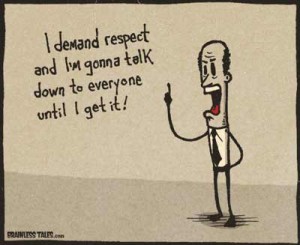 Actually you can demand respect. Of course we have seen others do it and we have all had a boss in the past that demanded respect. Respect however is not handed out based on someone’s demand or desire, but it must be earned through proper words and deeds. Therefore, although you can demand respect, you will not get it unless deserved.

Respect also does not come with a job position or title because respect must be inferred from others; it is something given. The concept of respect, therefore, cannot reside in a job or within a person. However, if we ask ourselves how many people we have known that were in leadership positions and not respected, then we begin to see that respect is something that is given to another person. Clearly, it is not something that resides within them.

How do leaders earn respect? First, “walk the talk” by doing what you tell others to do and not having a double standard. Second, influence people and don’t order them around or manipulate them. Third, use inclusive language and make being part of a team the easy and rewarding thing to do. Fourth, be there in person and participate by being seen and talking to everyone. And lastly, show that you have the moral courage to do the right thing, not what is most popular at the moment.

One difference in being a lieutenant and a flag officer is that the higher one’s position in an organization the more demanding the requirements to earn respect. It gets harder as we progress in responsibility. This is what many leaders fail to understand and associate respect with their job title. My company commander never made it past this position; it was his last. All his lieutenants continued on to more successful accomplishments.