[September 14, 2014] In his visit to an Austro-Hungarian Cemetery of World War I dead, Pope Francis decried war as an instrument of greed, power, crime, and destruction. “War is madness …” he said. At Redipuglia Italy, the war memorial entombs 100,000 Italian soldiers killed in battle.   The Pope spoke about those who died in WWI and about the victims of all wars. He likened today’s wars as “piecemeal” World War III. 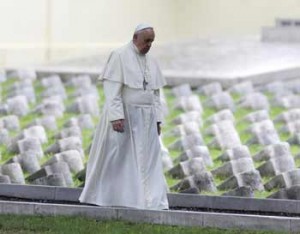 Pope Francis at the Austro-Hungarian Cemetery of Fogliano di Redipuglia

The Pope has a broad view of the history of war. Wars rarely begin with a clear-cut event and when they do, there was some other underlying cause. Wars often ramp up from smaller things to those much larger. For example, we can ask the question “when did World War II begin?” Did it begin with Pearl Harbor in 1941? For the United States it did, but not for Europe. Perhaps it began earlier when Hitler annexed Austria in 1938. Or it may have begun when Japan invaded Manchuria in 1931. I believe the Pope is trying to make an important point, one that calls for leadership at a very high level, that war has caused more death and misery than anything else in human history.

We can infer from his comments that “World War III” began some time ago. Did it begin with the terrorist attacks on the United States on September 11, 2001? Or did it begin earlier when President Carter released Ayatollah Khomeini to Iran in 1979? The Pope sees little good in the rise of Islamic terrorism across large swaths of the Middle East, Africa, and elsewhere. He said, “Even today, after the second failure of another world war, perhaps one can speak of a third war, one fought piecemeal, with crimes, massacres, destruction.”

The Pope has said however that the use of force to stop the Islamic State of Iraq and Syria (ISIS) from massacring innocents is acceptable. But he also said that it was improper to use Christianity as a reason to do so. I believe that the Pope can “see” what the future holds better than most of us. He is able to easily discern the patterns of violence that engulf much of the poorer nations of the world and it saddens him greatly. Let’s hope that this is not World War III.