[August 17, 2014] Today, many Americans are celebrating the “grooviest event in music history.” The Woodstock Music Festival ended after three days of “peace, love and rock’n’roll in upstate New York.” Very famous musicians played there: Janis Joplin, Arlo Guthrie, Joan Baez, etc. What nearly no one knows about is that on this date in 1942, U.S. Marine Lt Col Evans Carlson lead his men in one of the first combat raids for American troops in World War II. Technically the raiding force was designated Task Group 7.15 (TG 7.15) but was later known as “Carlson’s Raiders.” 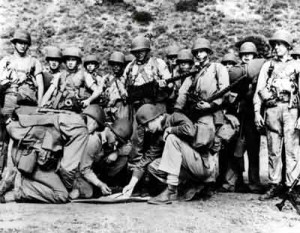 Training for the Makin raid. Commander of the Raiders Lt Col Evans Carlson, Major James Roosevelt (son of the President), and some their men.

The main objective of the raid was to gain intelligence and divert Japanese reinforcements from the ongoing Allied battle on the islands of Guadalcanal and Tulagi. TG 7.15 was responsible for wiping out most of the small Japanese garrison on the island. The Japanese did send additional aircraft and personnel to Makin Island, so there was some success on one of the objectives. However, little intelligence was gained. An unexpected gain from the raid was it significantly raised the moral of American fighting forces and citizens back home in the States.

Americans were also treated to a movie based on the raid in late 1943 when “Gung Ho!: The Story of Carlson’s Makin Island Raiders” was released for public viewing. The movie stared Robert Mitchum and Randolph Scott. Several books and additional movies were made on the raid that accomplished things beyond its original intent.

The lesson for leaders is that there will be unexpected results from what we do. Senior leaders should think clearly about what the impacts that could occur – second order effects. Unintended consequences are a result of the complexity of human behavior. The best of leaders are able to plan for those eventualities. In the case of Carlson’s Raiders destruction of the Makin Island defenders, the second order effects were positive. This is not always true. The best skill of a senior leader is to both predict and take advantage of those unintended consequences.