[August 16, 2014] Nero was the Roman emperor in July of 64 A.D. when much of Rome burned. Whether it was literally true that he “fiddled” an instrument while the city burned, is in doubt. Yet, the meaning that we take from his actions as a leader is what interests us in the study of leadership methods. The most popular meaning of the phrase is that a leader does nothing or acts blithely while bad things are happening. Whenever the phrase “Nero fiddled while Rome burned” is applied to a leader, it means that the leader is ineffective in times of crisis. 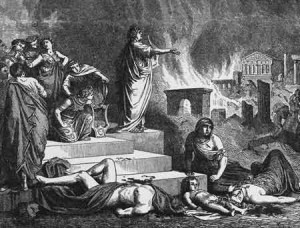 This is why it is so important for senior leaders to be physically present during a disaster or emergency. It is not that they are directing the details of the response so much as they are there to show who’s in charge and to build the confidence of those doing the hard work. We saw that President Bush came to New York City shortly after the terrorist attacks on September 11, 2001 and he was seen as a great leader. We also saw that President Bush did not go to New Orleans soon after the destruction of Hurricane Katrina and he was seen as aloof and uncaring.

There are important lessons for leaders to learn from this. The first lesson is that leaders should do what is necessary to ensure people know they care about the crisis. That usually means being present at important times and being in the right place to communicate critical messages. The second lesson is that leaders should not blame others in times of crisis for the problems that occur. People see what is going on and therefore it is incumbent upon the senior leader to provide the path to correcting the problem. The third lesson, although not the last, is that leaders must work hard to establishing trust and confidence. Trust and confidence are fragile and easily lost. Therefore, extra effort must be made to build it in those who work for us, peers, supervisors, associates, and all stakeholders.

Did Nero really play the fiddle while Rome burned? Most historians think that did not happen.1 What historians do know is that Nero was decadent and unpopular. When the fire began Nero was not in Rome but at his villa in Antium. He traveled to Rome quickly when he heard the news and helped provide relief measures. After the fire he used the land cleared by the fire to build his Golden Palace and gardens and also blamed Christians (an obscure religious sect at the time) for causing the fire. This made some people think he had the fire started for that purpose, reinforcing their lack of trust and confidence in him.