[August 15, 2014] I remember the beautiful Friday afternoon in early May 1999 when Fort Dix, New Jersey got the call that it would be receiving the next day over 300 Albanian refugees from war-torn Kosovo. Over the next month, the U.S. Army base was to receive over 4,000 refugees as part of a nationwide resettlement effort. These Kosovars were victims of ethnic cleansing. Sadly, ethnic cleansing has a long and brutal history in the human race.1 Today in Iraq, like in Kosovo and other parts of the old Yugoslavia, ethnic cleansing is based on religious affiliation. 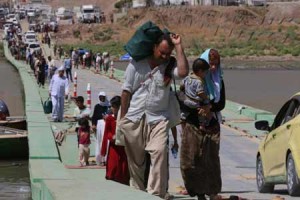 Before the invasion of Iraq in 2003, it is estimated that 1.4 million Christians made their home there. Despite not having exact numbers, it is estimated that about one third remain. And they are leaving. The reason most are leaving today is due to ethnic cleansing efforts by ISIS (now called the Islamic State).2 A week ago, ISIS took Qaraqosh, the largest Christian city of Iraq and part of the Kurdish region. Their choice was to: convert to Islam, pay a fine and have their property taken, or face “death by the sword.” ISIS seeks to create a pure Sunni Islamic caliphate across Syria and Iraq. They have aggressively targeted Iraqi minority religious groups in both countries.

ISIS is responsible for one of the largest ethnic cleansings of modern times. Interestingly, there has been little in the way of “moderate” Muslims condemning the actions of ISIS. A few exceptions can be found on the MEMRI website (link here). I highly recommend reading of these statements by some in the Arab press. Essentially the writers are saying that the ethnic cleansing of Christians in Syria and Iraq will leave a “black mark upon the reputation of Islam and Muslims.” There is some good news that some recognize ethnic cleansing for what is does to cultures. What is also interesting is the level of support for ISIS that comes from the Western world.

[1] “Ethnic cleansing” has been defined as the attempt to get rid of (through deportation, displacement or even mass killing) members of an unwanted ethnic group in order to establish an ethnically homogenous geographic area. Though “cleansing” campaigns for ethnic or religious reasons have existed throughout history, the rise of extreme nationalist movements during the 20th century led to an unprecedented level of ethnically motivated brutality, including the Turkish massacre of Armenians during World War I; the Nazi Holocaust’s annihilation of some six million European Jews; and the forced displacement and mass killings carried out in the former Yugoslavia and the African country of Rwanda during the 1990s.

[2] Islamic State in Iraq and Syria (ISIS) is the old name and the acronym is still being used.