[August 15, 2014] One hundred years ago today, the Panama Canal was opened for traffic. We all know about the engineering effort to build the 51 mile long canal, the effort to eradicate diseases in the area, and the economic and military need to have it built. Long recognized as a shortcut between the Pacific and Atlantic oceans, the Panama Canal would be considered the world’s most important pathway connecting the world. However, what is not known to many Americans is the political effort that made it all possible. 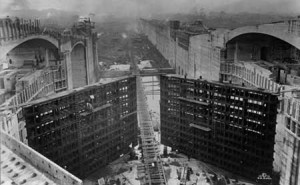 Old photograph of the construction of one of the many locks. The picture gives an idea of the massive amount of work involved.

The French were the first to try to build a canal in the late 19th century. Many years ago I stood on the mountain side of Panama and looked down onto the initial efforts of the French construction effort. As an engineer, the entire history of the construction was of great interest to my engineer unit and to me. Due to inadequate planning, disease, and financial problems, the French construction company went bankrupt. The French citizen and former chief engineer of the canal works Philippe-Jean Bunau-Varilla acquired the company. He would later play an important leadership role in the United States’ effort to build the canal.

What we call the Panama Canal today was at the time part of the country of Columbia. The Columbian senate however feared the loss of sovereignty and refused to agree to a treaty with the United States over the construction. The treaty granted the U.S. use of territory in exchange for financial compensation. To circumvent the Columbian government, U.S. President Theodore Roosevelt gave unstated approval to a Panamanian independence movement. The U.S. provided military naval forces to discourage Columbia from interfering with the independence movement. On November 6, 1903, the U.S. recognized the Republic of Panama. Twelve days later a treaty was signed like the one rejected by Columbia.

Construction began on the canal in 1906 and the canal opened 8 years later and after one of the world’s largest construction efforts. The Republic of Panama never liked the treaty and sought to revoke it. In 1977 President Jimmy Carter and Panamanian dictator Omar Torrijos signed another treaty with better conditions for Panama. The canal was turned over the government of Panama on December 31, 1999.