[August 14, 2014] That question is often debated and tinged with passion. Working my way through college, I trained dogs for a couple of years on the side; made good money, cash. Texas was a good state for dog training and I sure had a great time and earned a few extra dollars to pay the tuition bill. My time with dogs convinced me that they do share some behaviors with humans, especially emotion. The question I was often asked by clients was, “is dog behavior comparable to humans?”  We know, for instance, that dogs can be sad, sorrowful, and happy; just to name a few. 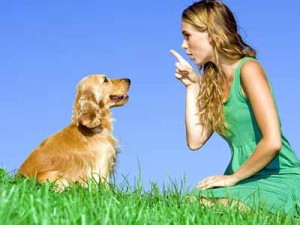 I am convinced there is some common ground. There are some prominent differences of course; dogs don’t use tools like humans do. Yet dogs do share some psychology with humans and other animals. For instance, they are shaped by their upbringing and training. Dogs that are neglected or physically abused behave differently than dogs brought up in a caring home of people (and other dogs). That behavior is not always good. It shows a lack of trust of humans and those abused are easily frightened. I never had an instance where a dog that was severely neglected or abused ever became a highly trained and dependable dog.

Training dogs also showed me that doing so makes them happier. They know how to please their “master” (that’s us) and they know what to expect for showing appropriate behavior. Many of the dogs I trained were to be personal body guards for their owners. With one word the dog would attack another human and were trained exactly where to bite and how to bite and only let go on command. Those dogs were extremely friendly, especially around children. True, only a few dogs could withstand the rigorous training and maintain a good emotional disposition. It took a lot of work from me as dog trainer but it paid off in a great dog and companion.

Do dogs behave like humans? The answer is a qualified “yes”. Qualified, because there are some obvious differences. But dogs are similar to humans for the reason that once trained, they can be better behaved than untrained dogs. Better emotionally, physically, and they were predicable. My well-trained dogs were an emotional part of me (or their owners) and they were better off for it.

Can lessons from dogs apply to humans? Yes. Humans should grow up in a caring home and should not have to experience neglect or abuse. Humans should also get a good education that is practical and grounded is its usefulness. Those humans that have this will do well and are more than likely to be productive members of society. Those that don’t may never recover.