[August 14, 2014] When Chicken Little was hit on the head with the proverbial acorn, he ran to the King to tell him that the sky is falling. All of us grew up reading fables and this is one of the more impressionable ones from our childhood. Chicken Little, also known as Henny Penny, is a name often applied to people who are either irrationally afraid or incite others to be irrationally afraid without justification. This is most often done through hyperbole and miscommunication. However, it is not the Chicken Little’s that we must concern ourselves about, but those in senior leadership positions that resort to hyperbole and miscommunication. 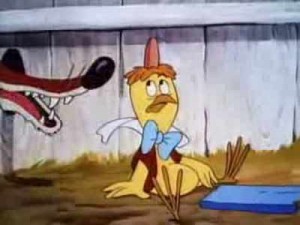 In American politics, this is a common form of communication and most citizens understand it. Thus, we take comments from our political leaders with a dash of skepticism … but we do listen. Yet, for professionals (my grandmother uses other, less complimentary names) the expectation is that they speak the truth with precision. The use of exaggeration to induce strong feelings one way or another is normally not acceptable. Perhaps this is why so many people have stopped watching the major television networks for news; some claiming that the term professional news reporter is a contradiction in terms. People discovered a significant bias and inaccuracies in reporting and turned them off.

When senior leaders use hyperbole, they do so knowingly. Being a senior leader means they have already had the relevant experiences to talk accurately and use words that can be understood. Thus, when they resort to hyperbole and other forms of miscommunication, it is irresponsible and they should be called out on it. As a leader, our credibility is on the line every day and each time we speak. When hyperbole is used, people usually know, but not always.

During World War II, the U.S. government asked Walt Disney to produce films with the message that fear-mongering weakens the war effort and costs lives. The films also discredited socialist-dictator governments and Nazism. In the 1943 version of the film “Chicken Little” (link to video here), the chicken jumps to a conclusion and stirs up the animals into mass hysteria. The fox then manipulates the hysteria for his own gain. The parallels are uncanny.