[June 3, 2022]  Want to be the “adult in the room?”  Well, that’s darn easy these days.  Just speak the truth.  Easy, huh?  Nope.  Our society turns its collective head away from the most commonsensical, essential truths that made us who we are.   This is not about the mental sewer you find on Twitter or the fake friendships on Facebook, but about everyday folks ignoring the importance of family, friends, community, and country.  One day you think that our nation has peaked on the wokism train, and the next day you think you’re still in the Twilight Zone.  When good people choose to turn away from workable solutions to common problems and decide they are sufficiently superior to the rest of us, bad things will happen.  This is a form of depravity, and the results will be very ugly and long-lasting.  Today, I have a few articles that demonstrate my claim.  I call it the big slide, the big slide of core values into chaos. 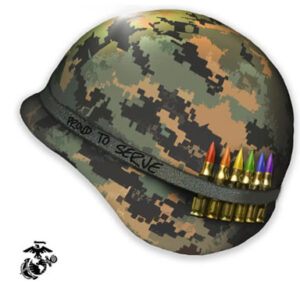 The U.S. Marine Corps goes full woke.  General David H. Berger is the current Commandant of the U.S. Marines, and he is a pussy!  When will Marines start wearing rainbow underwear and kissing their fellow Marines?  Hummmm, a good question with Berger in charge.  Case in point: the U.S. Marines Corps marked the start of Pride month with an image of a combat helmet adorned with rainbow-colored bullets this past Wednesday, sparking a predictable outrage over the mixing of warfare and wokeness.  At first, I thought this was satire.  Jason Buttrill, whose profile says he’s a former Marine and Defense Department analyst, wrote, “F–k out of here with this.  We don’t take political sides, and we don’t engage in social commentary.  We kill the enemy… period.”  The most highly decorated Marine, Chesty Puller, is rolling in his grave.  Just another example of a great institution sliding downhill toward uselessness.

U.S. President Joe Biden tells Naval Academy graduates he turned down an appointment to the academy.  On its face, this is another blatant lie by the president; easily fact-checked.  How do you lie about receiving an appointment with Navy graduates?  The truth is that Joe Biden got five student deferments in the 1960s while he was in college.  In 1968 he was judged physically “unfit” for service (during the height of the draft during the Vietnam War).  Fortunately, several media outlets like the New York Post, RedState, and the American Military News have taken up the question.  The new White House press secretary couldn’t comment on the lie because she “didn’t hear that part of the speech.”  I guess it’s not important to tell the truth any longer when a U.S. President tells tall tales.

The link between fatherless families and mass shootings.  Highly publicized mass shootings draw considerable attention from low-intelligence politicians who need to “do something” to stop this evil.  What do you do?  Find out why these mass shootings occur and work with local communities by encouraging good behavior and supporting intact families.  No.  The kneejerk reaction is to “ban guns”; thus, we are again being subjected to an attack on an inanimate object rather than on the slide of social values.  A contributing factor is fatherless families.  A child’s most important parental figure is the same-sex parent because children model themselves after them.  For young men, having a father in their lives provides a roadmap for manhood and a source of protection from the outside world.  Today in America, boys are being forgotten and treated as something likened to toxic.  And that attitude will end badly for us all.

25 thoughts on “Clearing the Spindle: Values, the Big Slide”