[April 16, 2014]  The news coming out of Nevada on the Bureau of Land Management (BLM) standoff with Cliven Bundy has been rather thin on facts.  What we do know is that Mr. Bundy has defied a number of court orders and has twice lost in federal court.  We also know that BLM senior leaders made poor decisions that trampled basic civil rights of U.S. citizens and those have exposed some questionable land management practices.  I will focus on the leadership aspects of this event.

The BLM has backed off the direct confrontation with Mr. Bundy, for now, but not after engaging in a number of bad decisions and showing an appalling lack of understanding of rights afforded to U.S. citizens.  Irrespective of what we think of Mr. Bundy and whether he is legally right or wrong is not the issue, the actions of the BLM are questionable and now have opened themselves to charges of corruption and improper influence by politicians.

What the BLM actions regarding Mr. Bundy have done is expose the fact that the federal government owns vast tracks of land (80% in the state of Nevada).  The states have limited sovereignty over those lands and the federal agencies that “administer” the land have agendas.  They restrict what people can do on those lands and on nearby private property.  In the case of the BLM (and others like the EPA), they are unfriendly to certain industries like ranching, mining, and logging.  Yet, they are not hostile to all industries.  In fact, solar and wind power development is favored and is getting preferential treatment.  It turns out that a Nevada Senator’s son is involved with one of the solar projects and this is where the corruption charge is coming from. 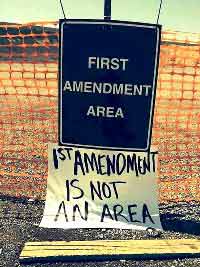 BLM leaders also made a bad public relations move by directing that a small “First Amendment Area” be established away from the existing protest area.  It was a bad PR move because of the exposure this brought to their land control activities.  The “First Amendment Area” move was done, they say, mainly to help ensure the safety of everyone.  Here is a message sent from the protesters to the BLM and federal government, “the First Amendment is not an area” – of course, unless you include the entire land area of the United States.

It also turns out that the BLM director was recently confirmed by the Senate this past week in his position and it was this same Senator who pushed the appointment.  The Director was this Senator’s former senior advisor.  What the connection is between the new BLM director, the Senator, the Senator’s son, the BLM activities, and the treats issued by the federal government, is not clear.  But, the charge of improper political influence certainly must be answered promptly and factually.  Transparency is a requirement of political leadership and our government agencies.

The federal government, in particular at the White House level, should get out in front of this issue and do so quickly.  Otherwise, it will once again get smeared in showing its lack of leadership.