[August 13, 2014] “It’s all ancient history so forget about it.” I was told by a number of political science professors that what happened in the country of Cambodia is unimportant in today’s world. The legacy of the “killing fields” that resulted in the death of approximately 2 million Cambodians, out of a population of 8 million, was not something of sufficient interest to be discussed in civilized society. That is why many of us probably missed the recently court of law conviction of two Khmer Rouge leaders for crimes against humanity. These two senior Khmer Rouge officials were sentenced to life in prison.1 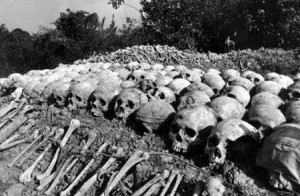 Between 1975 and 1979, the Communist Khmer Rouge government pursued a socialist policy of an agrarian collectivized labor system. People were forcibly removed from their homes in the cities and pushed into the countryside. Anyone who resisted or was suspected of connections with the former government, including professionals and intellectuals, was arrested and then executed. Ethnic Vietnamese, ethnic Chinese, ethnic Thai, Christians, Buddhists were specific targets for persecution.2

The Khmer Rouge genocide in Cambodia is something that leaders in a free society should neither forget nor refuse to study. It is a reminder of the tragedy of socialism and despotism. Perhaps this is why the many university professors turn a blind eye to the events that occurred more than 35 years ago. There are still many intellectuals in American who have a soft spot in their hearts for socialism, despite the magnitude of its failures.

Good news from the New York Times in covering the story. Bringing this to the world’s attention is something that is important. The level of atrocity here is nearly unimaginable but is the result of man’s inhumanity to man under socialism.