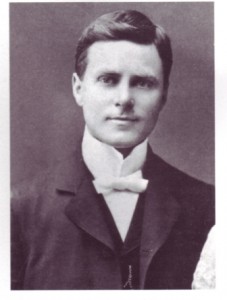 [October 8, 2013]  Yesterday I was fortunate enough to visit the corporate offices and museum of Hillerich & Bradsby Company who make the Louisville Slugger1 baseball bat in Louisville, Kentucky.  For the baseball enthusiasts out there, you can understand the thrill of visiting here.

But this is really a story about a family that through determination, hard work, persistence, and vision were able to turn a small business into a large corporate enterprise that provides more baseball bats for players across the globe than any other company.

The story behind the world-famous Louisville Slugger baseball bat began when J. Frederick’s son “Bud” began making baseball bats for himself and his teammates.  It is said that J. Frederick told Bud that the real money was in the butter churn and that baseball was a passing fad.

According to company legend, the first pro bat was turned by Bud for Pete Browning in 1884.  Browning was a star on Louisville’s professional American Association team – the Eclipse.  On a spring afternoon Bud, then seventeen years old, witnessed Browning break his favorite bat.  Bud offered to make a bat for his hero and Browning accepted.  According to the story, after the young wood shop apprentice lathed a quality stick from white ash Browning got three hits with it in the next game.  Because of his tremendous hitting power, Browning was known as “The Louisville Slugger” years before the Hillerich family trademarked the name for their bats.

The company is still being run and owned by the Hillerich family.  The success of the family business is based on its insightful leadership throughout the last 157 years.

[1] The brand name Louisville Slugger was registered as a trademark in 1894.