[May 27, 2014] As a kid who loved all things related to science, I was enthralled with the X-15 experimental rocket aircraft of the 1950s and 60s. Somewhere in the attic is the plastic model I built around the time I started grade school. The engineers who designed and the test pilots who flew these aircraft were leaders in their day; doing the things that made later our flights to the moon a success. 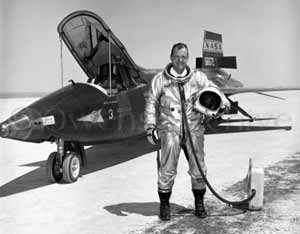 Today, we honor those folks and their leadership and contributions to space exploration. These were the type of men and women who helped make America a great nation. We need more of them.

We are also honoring test pilot Bill Dana who flew the X-15 rocket plane and other pioneering aircraft. He is shown in the photograph here. He passed away two weeks ago1.

[Note] The experimental rocket aircraft were a joint venture between the U.S. Air Force and NASA.