[June 12, 2014] Playing little league baseball while growing up in the deep South brought with it a number of lessons in life. These lessons were to later translate into successful leadership traits that were to stay with me the rest of my military career. In fact, I think that was the point of the game; besides having lots of fun. 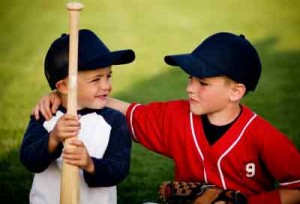 The evil of sore winning or losing at a game tells us a lot about a person and about how they were raised as a child. Translated into team sports it means that we should be extra good to others whether we win or lose. Applied to democracy it means that we should be able to put people into office and remove them from power and do so peacefully. All this means that by being magnanimous1 in victory we will ensure those that lose are not leaving disrespected and with a bad heart.

Lessons of life learned from sports are the best and most significant. The lesson to be a good loser is important. In baseball, as in life, it does not matter if you get a ‘bad call’ or an unlucky break. If we lost the game, we learned to ‘suck it up’, shake the hands of the winning team, to never whine about it, and practice harder for the next game.

British Army Colonel Tim Collins2 gave a speech entitled “Magnanimous in Victory”. It is considered one of the best speeches to his men before battle in the country of Iraq. It is worth re-reading. I recommend it highly because he spells out, as a leader should, why we should be ferocious in battle but should also show the enemy respect in their death and defeat (link to the speech here). He has a great way with words and tells his men to be magnanimous in victory.

All us little league baseball players grew up as successful business and military leaders. I credit our coaches and our parents for ensuring we practiced good sportsmanship.  If we were the winners, we were taught never to gloat or degrade the losers, but to wish them well in our next meeting on the baseball field. We did our best to be … magnanimous in victory.

[2] He gave the speech as a Lieutenant Colonel in 2003 on the eve of battle. He belonged to the 1st Battalion, Royal Irish Regiment of the British Army.