[June 12, 2014] Considered one of the greatest speeches of the 20th Century, U.S. President Ronald Reagan spoke these lines on June 12, 1987 as part of a major speech to the citizens of West Berlin. In the speech, he addressed the Soviet Union’s General Secretary Mikhail Gorbachev and told him to sign up for peace and prosperity in Europe and the Soviet Union. 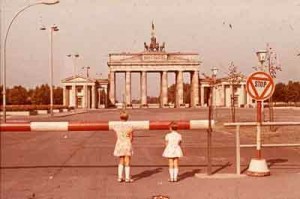 President Reagan was referring to the Brandenburg Gate as part of the “Berlin Wall” that was designed and built by Communists in 1961 to keep Germans from escaping Communist-dominated East Berlin into the democratic West Berlin. The wall symbolized the Cold War between the United States and Soviet Russia. The tragedy of the wall is long forgotten today, but at the time it was tremendous symbol of the failure of socialistic authoritarian governments.

The significance of the speech and these lines in particular are an example of what great leadership is all about. The speech can be found at the U.S. National Archives (see link).

The wall fell in late 1989 and by 1990 the Union of Soviet Socialist Republics (USSR) formally ceased to exist. The world began to move away from Communism as a failed social and economic system.