[May 26, 2014: posted 8:05 pm] I’m posting this well after my speech and after returning home to Brooklyn, NY. While speaking, I made two important changes that are integrated below.

The rest remains unchanged and here it is with those changes inserted.

[May 26, 2014: posted 6:00 am] Memorial Day is a time of recognizing those military men and women who have given their lives for our nation. It is also a time of parades, speeches, cookouts, and the unofficial beginning of summer. Below is the Memorial Day speech that I will be giving in just a few hours. 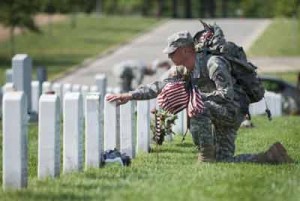 We gather here today in this most beautiful community under a flag that flies free to remember those brave Americans who gave up their lives to make this all possible.

We are gathered on this quiet Parkway as the sun shines yet on another Memorial Day in the United States of America.   This is our day … a day that our country has set apart to remember what was gained in our wars, and all that was lost.

Our wars have won for us every hour we live in freedom.   And those wars have taken from us the men and women we honor today, and every hour of the lifetimes they had hoped to live.

This day of remembrance was first observed to recall the terrible casualties of the war Americans fought against each other; the American Civil War.   In the 150 years since, our nation’s battles have all been far from home.   On the continents of Europe and Asia – in Korea, Vietnam, and the Middle East … where some of the fiercest of those battles, the heaviest of losses, and the greatest of victories were won.

And in all those victories the American military came to liberate, not to conquer.   The only land we claim as our own are the resting places, cemeteries for our men and women.

Memorial Day reminds us of America’s responsibility to remain the world’s leading force for peace.   This day also reminds us to thank God that we live in a nation where love of freedom prompts individuals to courageously lay down their lives for their country.

Words can never repay the debt we owe those who died in military service. It is up to us, the living, to uphold their legacy with respect, reverence and heartfelt gratitude.   Only in that way can we give true meaning to their sacrifices. Today, the American people can bear witness to the reason why we remember our fallen servicemen and women.

Our most recent combat veterans from Iraq and Afghanistan now serve as a testament to the sacrifice that comes with the obligation to duty. But we must be ever mindful that it is this sacrifice that has preserved this nation and the ideals we treasure.   We, and our children after us, must be devoted to the principles for which these men and women died . . . to honor, loyalty, integrity and faith in the America.

Some people carry with them mental images that they associate with the loss of our honored dead – rows of tiny American flags placed by headstones, a flag-draped coffin, or a simple white cross. Others may listen to speeches in a town square or visit a cemetery. Many will say prayers for the ones who never came home and the family members and friends that loved them.

And yes … the world is a better place for their sacrifices. But not yet a place secure from evil.   So the struggle against tyranny and injustice continues and unfortunately the roll call will continue to grow.

“War is an ugly thing,” British philosopher John Stuart Mill once said, “but not the ugliest of things”.   He spoke of the decayed and degraded thinking of those who believe nothing is worse than war.   His message was that a person willing to give up their freedom and the freedom of others, is a miserable creature who encourages evil by willingly subjugating himself to it.

Today, as America’s young men and women carry that torch into battle yet again, let’s stop to appreciate the trust, the courage, and the idealism that burn in their hearts.

Times of war are times of national trial – times that test the mettle of our Soldiers, Sailors, Airmen, Marines, Coast Guard, and civilians.   If this is a crucial turning point in the life of the United States, the men and women of our armed forces stand at the edge of history.

But this is important: in the competition of ideas and ideals, I hope all Americans can agree on one thing.   We must respect the integrity of our fighting men and women.

Our Soldiers, Sailors, Airmen, Marines, Coast Guard, and civilians are facing grave danger. For the enormous sacrifices they’re making today, these heroes deserve all the dignity and all the praise that America can give.   We have a duty to deliver that respect and gratitude.   It is a debt of national honor.

Briefly, for a moment in our history, those whom we honor today held our nation’s destiny in their hands.   In that moment they did not fail us. We must not fail them now.

On Memorial Day, America honors her own.

Long after putting away his uniform, a WWII American GI expressed his own pride in the truth about all who served, living and dead.   He said, “I feel like I played my part in turning this from a century of darkness into a century of light.”

And, when you leave here today, realize that every bit of the ground you walk on has been paid for.

Paid for with the blood of those who made a decision.

Paid for with the blood of those who decided that this Nation was worth fighting for.

The heroes we gather to remember, were more often than not, just ordinary people thrust into extraordinary situations who made the ultimate sacrifice for their country.

Even today as we gather here on this solemn occasion, young Americans are enthusiastically joining our military to fight America’s newest enemy, Islamic terrorism.   And many have already died.

So the roll call of those who willingly sacrifice their lives to fight injustice and tyranny continues to grow, making our presence here today all the more meaningful and all the more important.

In closing, words cannot even start to express my gratitude to America’s veterans.

God Bless the American veteran.   You are indeed loved and appreciated.   When I meet you, I will shake your hand, thank you again, and tell you that it is to you I owe my freedoms and my next breath.