[April 17, 2014]  Picture just for the moment, the proverbial drill sergeant screaming into the face of a young recruit.  The purpose has always been to “toughen ‘em up” and to “get their full undivided attention.”  And of course, that is exactly what it did – both – made them more resilience against stress (mentally stronger) and also focused on doing their job.  This was simply a leadership technique that had the added benefit of scaring the bejesus out of them so they would have respect for authority. 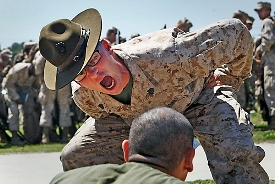 Yelling at recruits, or anyone for that matter, is no longer allowed.  At one time recruits could carry “stress cards” that allowed them to use them to avoid being put under pressure if they felt too stressed out1.  Thankfully, that is no longer in fashion.  At one point in time all individuals joining the military were subjected to these types of stressors; new recruits but also officers-to-be in ROTC, military academies, and Officer Schools.

Military personnel have to pass through the rigors of many stress-filled days.  When they graduate to the next level, it was recognized that they have survived a “rites of passage” that meant they passed the test of soldiering; they were part of something special.  This was based on both physical and mental capabilities – more than anything else, you had to keep your head (not panic) and show you could function as part of a team.

This is no longer necessary.  We have created an environment of low expectations, of shielding the recruit, and not testing them under stress, thus not improving on their physical or mental abilities.  We are weakening their resilience not improving on it.

Certainly the military has changed with the changing aspects of today’s wars.  But the principles of war have not changed and neither has the outlook that our troops must be strong, certainly stronger than most.  Today when they fail (and some will inevitably fail), we keep them anyway.  Our military is becoming bloated with troops we are unwilling and now incapable of fixing.  We are reluctant to strengthen them using time-proven techniques by introducing minor stressors into their lives (getting up early, standing guard in the rain, being on KP).

These minor, artificially induced stressors had allowed them to better adapt to real life major events, like war.  Now in grade school everyone gets a trophy and in the military they all get promoted.  Am I arguing for increasing standards?  No, for that is not the point.  I’m for changing the way we train all troops throughout their careers; not just as raw recruits or cadets.  It also means, for example, removing leaders who fail to perform but not kicking them out (unless their behavior is illegal, immoral, or illegal) but placing them where they can get another opportunity to learn.

The introduction of small random stressors makes people more resilient.  It makes them stronger against big events that we should be training our troops to withstand.  We have taken stressors away from them and are calling it a new era of “respect.”  But respect is not measured by pushing them out of their comfort zone but by showing them how to earn respect through action.

The application of this goes far beyond the military, of course.  It applies directly to all businesses with the goal of making their employees better.  It applies to families and to any social context.  People, who are under some level of pressure to perform, will perform better given the right leadership.  Shielding people from stress weakens them fundamentally.

In the military, we have met the “soccer mom” and we are her.