[April 11, 2014]  They were known as the Brooklyn Mohawks and they were famous as “fearless high-rise construction workers.”  As iron workers and riveters, they helped make the New York City skyline in the early 20th Century.  As senior leaders know, leadership employs bravery (moral or physical courage).  The Iroquois Nation’s culture1 with a “warrior ethic” was a perfect match for the hard work and physical courage required on the construction of skyscrapers. 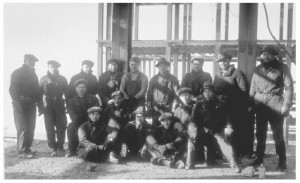 The Mohawk Indians lived in temporary housing in the Northwest section of Brooklyn known as Boerum Hill2 (near the Brooklyn Bridge).  Originally from Canada, construction work brought them to Brooklyn where they were instrumental in construction of such famous landmarks as [the old] Yankee Stadium (1923) and The Empire State Building (1930).

Many people at the time thought the Mohawks were not afraid to work the heights (without safety netting or other devices).  This was not true (see extensive research by anthropologist Morris Freilich3) but the perception was important.  What made them different was how they were able to deal with it better than others – the old timers mentoring and leading the young.  This included the teaching of the ethic of bravery, self-reliance, as well as pride in their ancestors and family.

[1]  The Iroquois Nation is composed of the Seneca, Onondaga, Mohawk, Oneida, Cayuga, and Tuscarora tribes.

[2]  Stories are common about the “Little Caughnawaga,” the Wigwam Bar, the Spar on Atlantic, the Cuyler Presbyterian Church, PS 47, and many more.

Why do so many Native Americans work on skyscrapers? http://www.straightdope.com/columns/read/659/why-do-so-many-native-americans-work-on-skyscrapers