[July 15, 2014] Thirty-five years ago today on July 15, 1979, President Jimmy Carter gave what has been called the “malaise speech.” Others called it his greatest speech and likewise many have called it the worst speech ever given by a U.S. president. The New York Times said the speech “struck a chord” and that it was on-target giving the President a lift in his 37% confidence rating by citizens. I remember the speech well when it was given and remember thinking, “we’re screwed.” 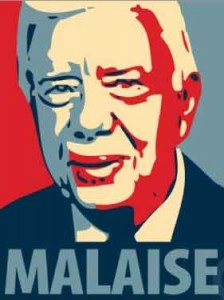 America was in a slump. Energy prices were skyrocketing, moral in the military was at an all-time low, several high-profile assassinations had taken place, there was high monetary inflation, and high unemployment. President Carter wanted to connect with the American people and ask for their help in getting us out of a slump which he considered mostly one of our citizens lacking confidence and being overly concerned about consumption.

Looking back 35 years we can learn from that speech1. The lesson for all leaders is that making it appear that the problems are the fault of the people, is a bad idea and a poor leadership technique. In this case, the president appeared to be blaming American citizens on the failures and problems instead of taking on the problems himself. As president, he worked very hard but his pessimism about America showed through in his speech and other actions. President Carter simply did not understand the people of the United States.

The next year, when President Carter was up for reelection he ran against Ronald Reagan. Despite calling Reagan “a dangerous right-wing radical”, Carter’s defeat was the most lopsided for any incumbent president in an election where only two candidates won electoral votes. Pessimism does not work for a leader.