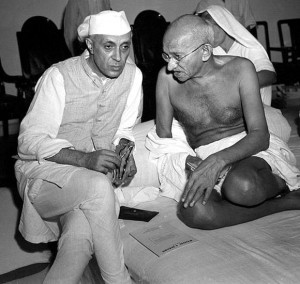 [October 31, 2013]  Mahatma Gandhi was not only a great leader for the country of India but became one of the most influential leaders in the world.  He showed that a leader can fight for a better world innovatively – in this case, without weapons but with thoughts and beliefs.

On the surface, Gandhi appears radically different from other great senior leaders.  He certainly was different from a Douglas MacArthur or a Vince Lombardi in appearance, personal behavior, and mission.  Yet, he was not that different in that he employed core principles that are remarkably similar to other leaders.

Here are some of his core principles:

He was also the epitome of the selfless leader – honest, reasonable, and possessed of both physical and moral courage.  He did this to carry his country forward to independence and to recognize the problems inherent in that transition.

His story is best told in his autobiography1 published after his death in 1993.  The book is about the message he takes to the world.

“I have nothing new to teach the world.  Truth and non-violence are as old as the hills.”  – Mahatma Gandhi

Gandhi’s biggest contribution was not the truth itself, as he states.  He did something new and that is to teach the world about how to implement the truth of peace and change through “forceful resistance.”