[June 23, 2014] “Now, the rest of the story.” Those iconic words represent the essence of radio personality Paul Harvey. Certainly not a traditional great leader and not even in the minor leagues with the greats like General Eisenhower. Yet, Paul Harvey was one of the greatest communicators in America. Born Paul Harvey Aurandt (1919-2009), he was on radio from 1933 until 2001 only when he was forced off-air from weakened vocal cords. 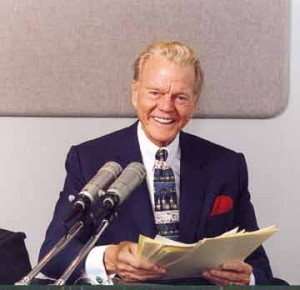 Paul Harvey was an exceptionally successful radio personality. His estimated audience was 22 million people a week. Despite this, he seemed to talk to you alone …. a rare talent. Radio was always part of his life. He worked in various radio stations; a requirement for success at the time. After serving in World War II, he became popular in Chicago for shows that included “Jobs for G.I. Joe” and “The Rest of the Story Paul Harvey News and Comment.”

Some of his leadership characteristics are:

To hear one of his better 3-minute segments, listen to this one from 1965. It’s relevant even today despite being on radio nearly 50 years ago. It gives a good idea of his method to influence. I highly recommend listening to him at this YouTube link (here).

Paul built radio receivers as a young boy. Noting an interest, a high school teacher suggested that he get a job at the local Tulsa, Oklahoma radio station. He began by cleaning up around the KVOO studio. Later he moved on to fill in on the air, reading commercials and the news. And, now you know the rest of the story.

[Note] A few good websites that give some history of Paul Harvey: