[July 01, 2014] A number of years ago, I was fortunate to travel to Florence Italy to be a tourist, relax a little, and see the sights. My goal was to visit arts museums and see the cultured side of life as I had been doing while living in Germany. Unexpectedly, a small group of us were caught up in a wild game of “football”. My friends called it, “savage manliness”. 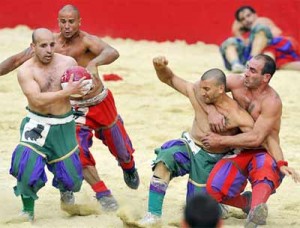 I had never experienced a game like this. It was even rougher than rugby … a “manly” sport and one we often played. This game was the toughest sport I’d ever witnessed, period. Later I learned that the Italians called it Calcio Fiorentino. It think that means “football of Florence (Italy),” “Florence kick game,” or something similar. The game is believed to have originated in 16th Century Italy.

To us, it appeared the way to win was to beat up the other team. Punching, head-butting, fist fights, all appeared to be okay. The game occurred in an arena-like stadium with a wet sand floor. It was exciting, bloody (our game), dirty, and very interesting. I’d go see another game but never play it again.

To see some action in video, go to this YouTube link here. The video is narrated in Italian, but one doesn’t need to understand the language to see a few minutes of a game. One commentator called it “penosi e ridicoli” [painful and ridiculous].  Sports lessons come in many forms.