[July 01, 2014]  News comes to us over the past several weeks that large numbers of residents who do not pay their water bills are having their water service disconnected.  What is interesting, from a leadership perspective, is what folks are saying and doing about it.  A water department official said, “The majority of our customers (who) are in delinquency status, they just built a culture of ,’You’re not making me pay – I am not going to pay’.”1 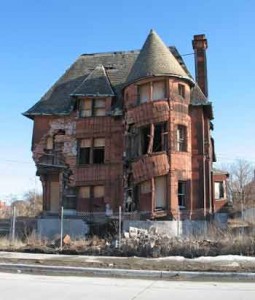 An abandoned house in Detroit

There is no doubt that the City of Detroit has had its share of problems.  The problems are far ranging and are complex in many ways, making it hard to discern the real issues that have caused the economic decline of this city.  One city problem is the entitlement mentality of much of its population.  There is an expectation that the government will take care of them – it is “owed” to them.

A few days ago I discussed the effects of socialism on city utility systems (link here).  My point was that under socialism, workers have little incentive to repair the utility systems.  They also believe that all citizens have the “right” to receive services for free.  This “entitlement” viewpoint is common in socialist nations.  Yet, unexpectedly we see this entitlement mentality playing out now in many cities across the United States.

Where is this entitlement mentality taking us as a nation?  No one really knows the answer to the question.  But, what we do know is that the U.S. and other western nations that have traveled this path before, will struggle economically.   And, we know that the nation will no longer have a vibrant citizen who looks for independence and pride in their work.