[February 27, 2022]  The invasion of Ukraine by Russia has not gone well.  The reason is simple: courage on the part of the Ukrainian people.  Ordinary soldiers and citizens are fighting the Russian juggernaut with unexpected tenacity.  This is a genuine David and Goliath story unfolding right before our eyes. 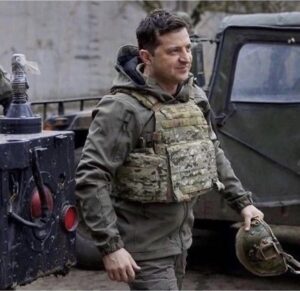 “I’m here.  We won’t lay down our arms.  We will defend our state.” – Ukrainian President Volodymyr Zelensky

Oh, I cannot fail to add this one.  It stands alone.  Many American celebrities, politicians, and “experts” showed us how remarkably foolish they are.  They are characteristically aloof, uncaring, and unserious – all simultaneously.

But, will Ukraine survive the night?1

27 thoughts on “The Courage of Ukraine”